Alexis Zipras and Zoran Zaev were awarded a peace prize for their efforts in settling the name dispute between Greece and North Macedonia. 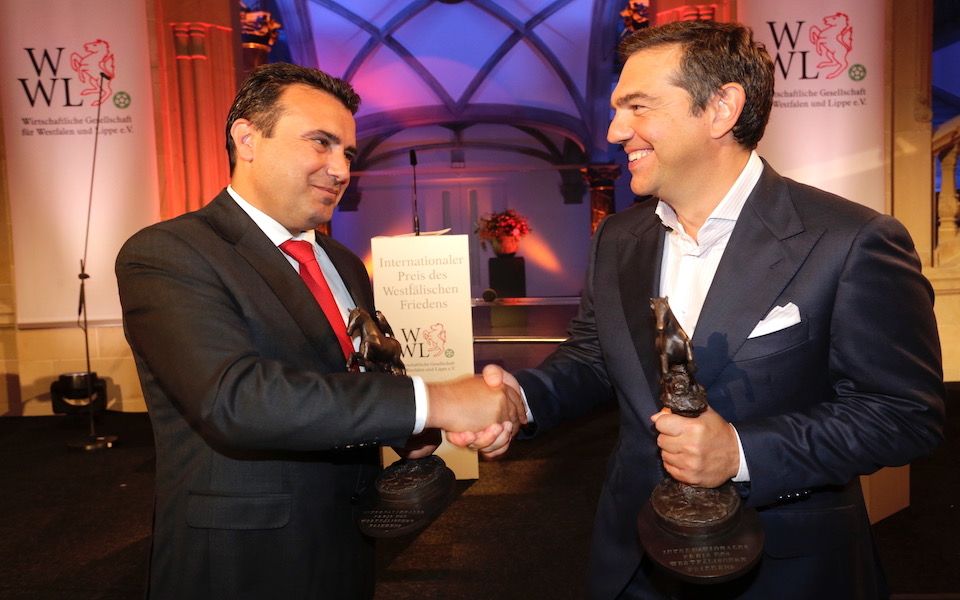 The former Greek prime minister Alexis Tsipras and the current head of the Macedonian government, Zoran Zaev, were awarded the International Peace Prize of Westphalia on Saturday. The Economic Society for Westphalia and Lippe honoured them in the German city of Münster for their “diplomatic prowess” with the agreement in the Macedonian name dispute and their contribution to stability. Through the Prespa Accord, Tsipras and Zaev ended the decades-long conflict over the name of North Macedonia and contributed to stability in the Balkan region.

"We chose to leave solutions like traces behind us. Solutions for our citizens and or our societies. An example of European leadership!", said Zoran Zaev in his speech at the award ceremony. For Alexis Zipras signing the Prespa Agreement was a major diplomatic achievement in the region:

"Historically, the Balkans have been a difficult region to promote peace. We have seen war burning the hopes of many generations, and nationalism destroying the branches of peace and prosperity when they were starting to grow. This is why the goal of the Prespa Agreement was to develop deep roots in the conscience of our peoples and the relations between our countries."

The prize was first awarded in 1998 on the occasion of the 350th anniversary of the Peace of Westphalia, which ended the devastating territorial 30-year war in Europe. Since then, it has been awarded every two years to personalities or representatives of states and groups who have worked for the cohesion of Europe, and to youth organisations who have become role models for peace in the world through their actions.